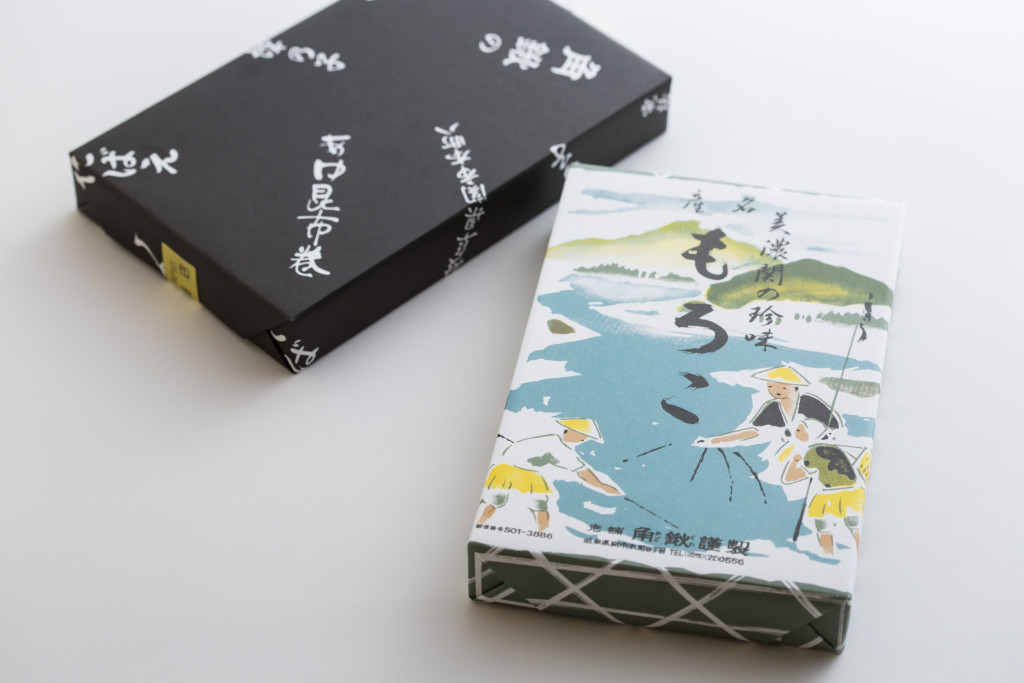 It is believed that tsukudani was originally created as preserved food by fishermen on Tsukudajima Island in the early Edo period by boiling small fish with soy sauce.

Tsukudani spread to different parts of Japan by people who returned home after the required attendance in Edo under the Sankin Kotai system. Among other types of Kadokuwa’s tsukudani, kanroni is made with the minimum boiling time for eating the whole fish with bones so that the quality of materials can be cherished. This is why our kanroni has a sophisticated taste featuring the quality of materials, not too sweet,  too hot or sticky, unlike ordinary kanroni.

This kanroni is made of high-quality ayu that has been raised carefully and affectionately, using specialist skills that have been inherited from our ancestors, as modified by the fifth generation owner into a modern style.
Many people may have the assumption that kanroni is boiled in a thick black color, and tastes thickly sweet and hot. In contrast, Kadokuwa’s kanroni uses only soy sauce, sugar, mirin (sweet sake for seasoning), ginger, and sake without adding syrup or additives. The aesthetic color after boiling and the light sophisticated taste are exquisite and are unlike any other kanroni. Some customers say that they like Kadokuwa’s kanroni, even though they cannot eat ayu fish.

Tukudani of Ururu fish: available from around June to September 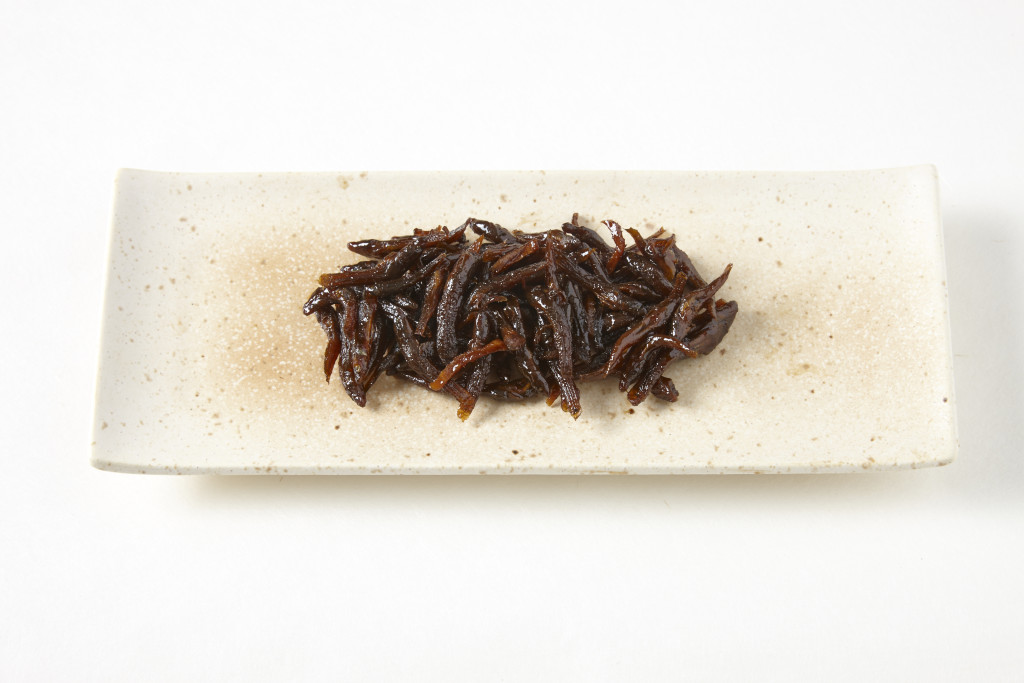 Ururu fish: available from around June to September

This fish is called by many local names, including ururu, gotcha, and uruncho, and is a type of yoshinobori (Rhinogobius brunneus).
Ururu is a small fish but is believed to swim down to the sea and to later swim back upstream in the same season as ayu fish. Ururu has a sucker in the belly, and it is difficult to catch this fish as it swiftly swims from one stone to another as if jumping. There is a fishing technique called noboriochi, where a fish ladder is prepared in the river itself, and ururu that have swum upstream are led into fish crates underneath. It takes one or two days to merely put up this device. It is also necessary to repair the device every time it rains heavily. This is a difficult technique with the catch becoming poor not only when the water level is high, but also when it is too hot or when there is too little water. Three kilograms a day would be a good catch for a normal fisherman.

Ururu is a precious fish in this way and has a taste totally different from that of other fish because it swims upstream along the riverbed. The fifth owner recognizes ururu only by smelling its boiling steam. Even though this fish has a unique appearance and seems to have a peculiar taste, it actually tastes very mild. It has such a mild and sophisticated taste that some of our customers enjoy our ururu, even though they cannot eat fish at all.

Tsukudani of Moroko fish: available from around October to June 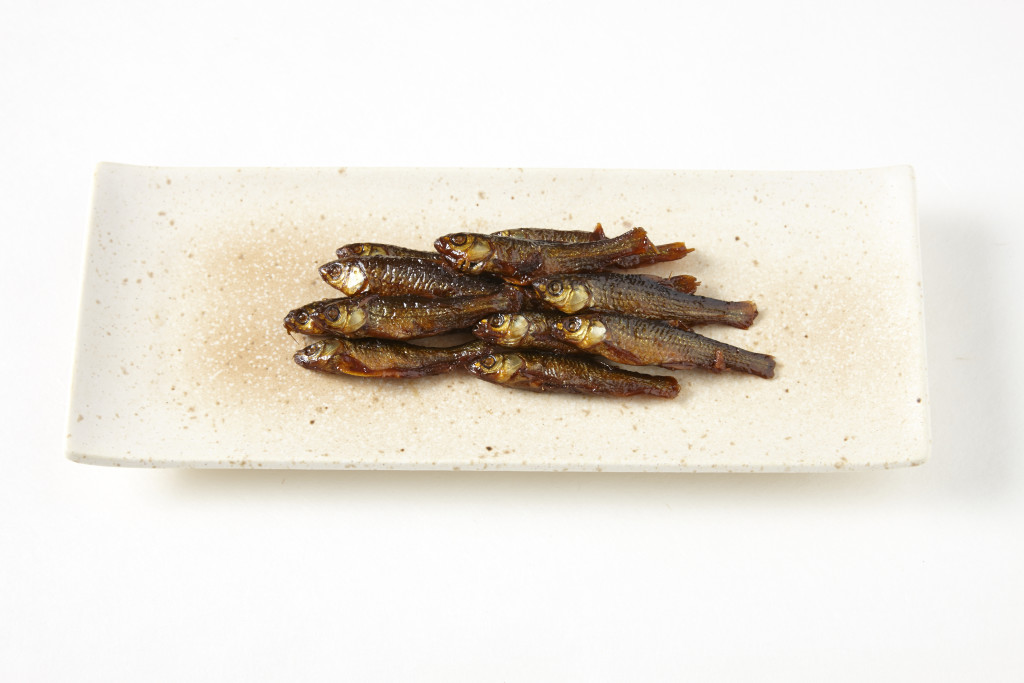 Uses moroko produced in Japan.
Best consumed: within one week (two weeks only in winter) preserved at room temperature.

Chobo Inari Shrine is worshipped as a god of trade and is located in Gifu. Because it is an inland prefecture, local people have eaten a lot of freshwater fish since old days, including the famous moroko fish. Despite such a long history, moroko was put on Kadokuwa’s product portfolio relatively lately (presumably about 40 years ago).
Although moroko has a slight bitterness, it has a mild, fatty and easy-to-eat taste and has been the best-selling product in Kadokuwa for more than 20 years. Tsukudani of moroko is boiled using specialist skills that have been inherited since our foundation in the late Edo period as modified slightly over time. Its exquisite taste goes wonderfully well with rice, sake, and other dishes, including oshizushi.

Tsukudani of Honmoroko fish: available from around September to December 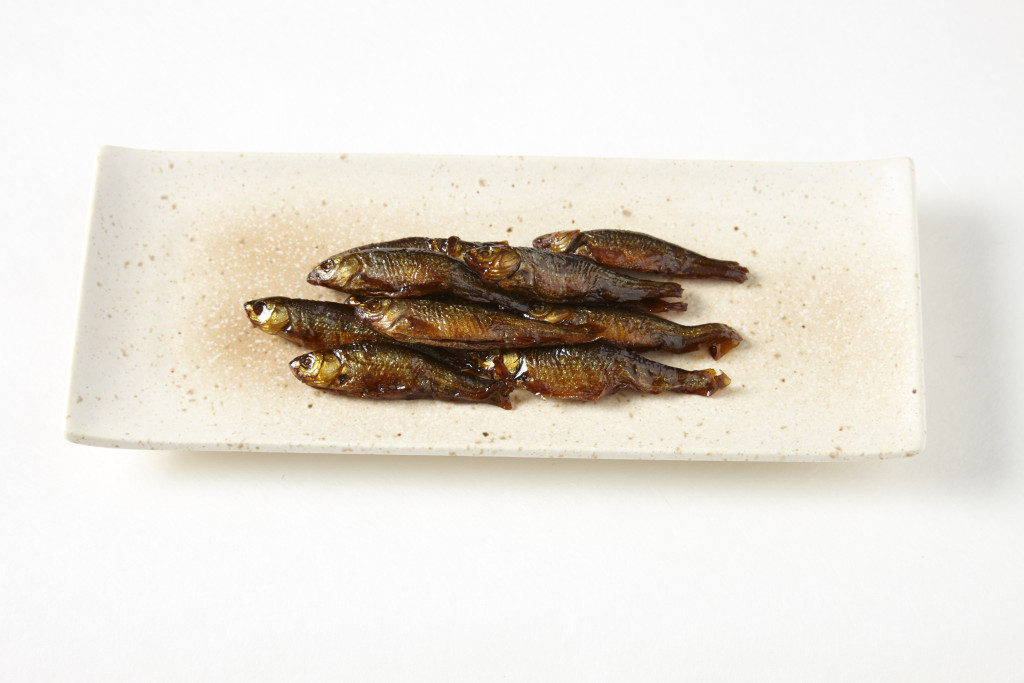 There are many species of moroko. Honmoroko is said to have the most wonderful taste among other moroko species or even among all fish of the carp family. Honmoroko tastes blander and more sophisticated than moroko. We manually boil high-quality honmoroko that has been raised in Gifu without using any additives. Try the delicacy of our honmoroko, which is also loved in the first-class restaurants of Kyoto.

Tsukudani of Hachinoko (bee larva): available from around October to November 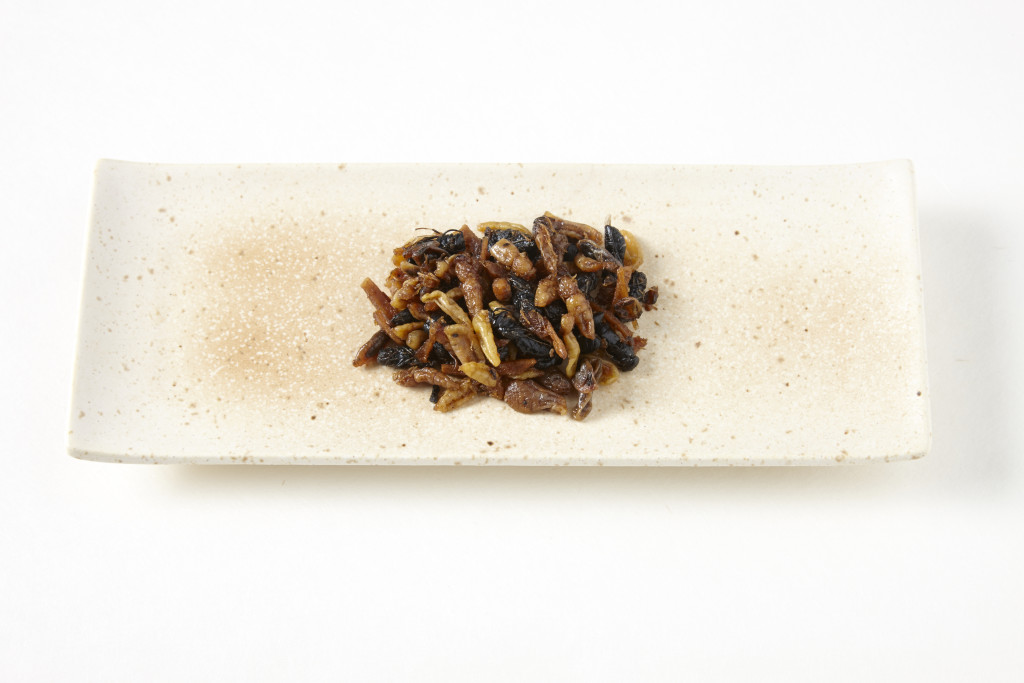 Hebo has been loved by local people in Gifu. “Hebo” means a yellow jacket that makes its nest in the ground and has the scientific name Vespula flaviceps. Although it is called kuro suzumebachi (suzumebachi = wasp), it has no poison. People lure hebo to bait, release it after attaching marking cotton, and literally run around the mountains looking for the mark that locates the bee’s nest. Hebo is such a precious delicacy that people make great efforts as above to taste it. The bee larva may be difficult to eat, at first, because of its appearance. However, once you find courage to try it, you will be amazed at its wonder. The fifth owner could not eat it until he inherited the business, but he became enthusiastic once he tried it. Now he even recommends that his family enjoy it as well. We have never found tsukudani from bees that is as delicious as ours. Just try it.

Tukudani of Ikadabae (Opsariichthys platypus): available from around December to February 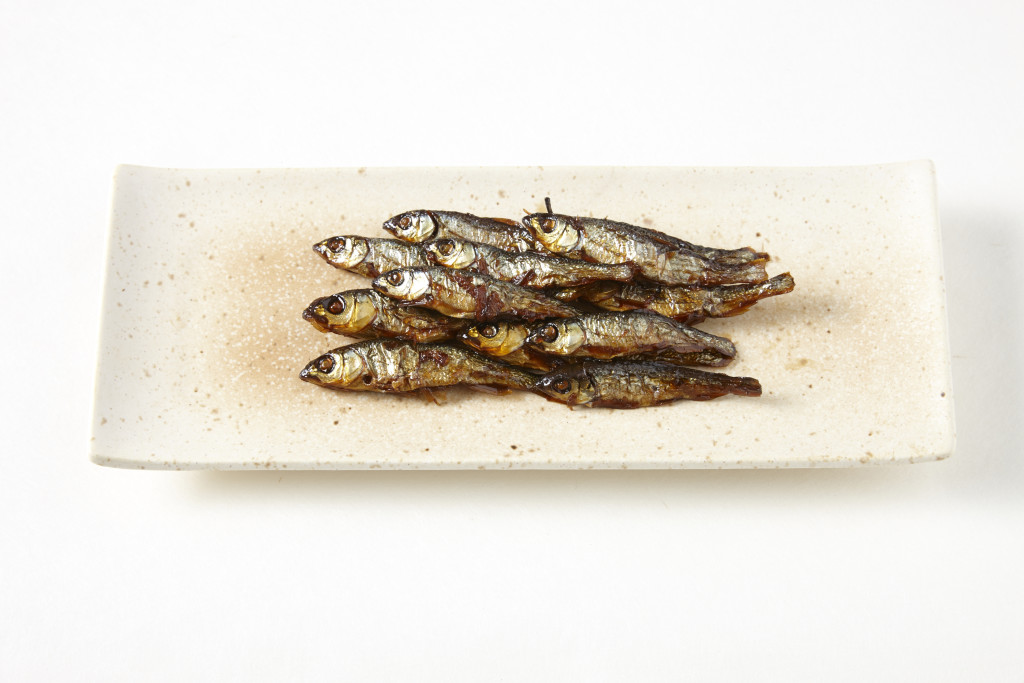 Gifu has been a place for stocking timber. Beneath the timber that was arranged into rafts and floated on the river, fish gathered. People made such fish into tsukudani and found it extremely tasty. It is believed that this is how tsukudani took root as local food. “Ikadabae” refers to tsukudani made by boiling shirahae fish (a type of Opsariichthys platypus). There is a term “kanbae (kan = cold)”, indicating that the colder it becomes, the tastier shirahae becomes. While some people may find its taste peculiar, its clear flavor is almost unparalleled. Ikadabae has been so famous that many customers had assumed that it was our trade name until a little while ago. Unfortunately, the catch of shirahae has substantially declined in recent years due to changes in river conditions and decreased fishermen. If you are interested, please e-mail or call us to check on the availability. The fifth owner loves this fish the best (in particular, he is fond of large-sized ikadabae, though it has parts that feel hard in the mouth).

Kanroni of amago fish (Oncorhynchus iwame): available throughout the year

Amago is a fish of the trout family and inhabits mountain streams. It has a close kinship to yamame fish (Oncorhynchus masou masou). Our kanroni uses amago raised in Gifu, a land of clear streams, and boils them into a light, sophisticated taste through a handmade process using no additives, just like the kanroni of ayu. Unlike ayu, amago has unique texture with its white flesh tasting bland and dissolving gently in the mouth. Anyone will like this fine-tasted kanroni. Try and compare the two types of kanroni fish.

Kanroni of ayu fish with roe 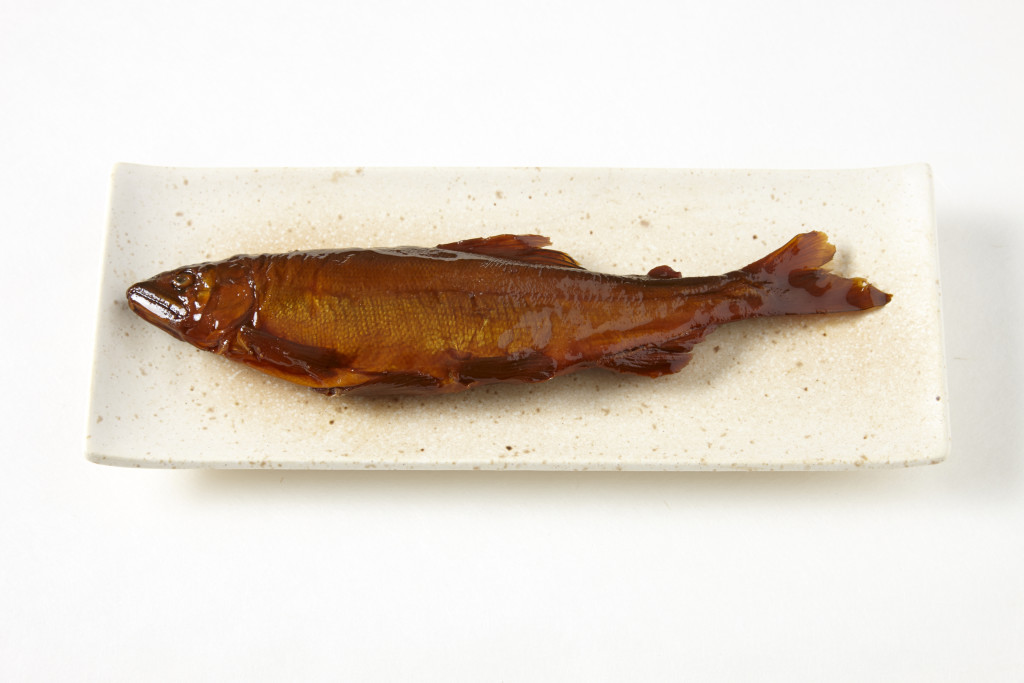 This kanroni uses ayu fish that have bellies filled with roe and is a special seasonal food only available in fall. It is one of the treasures of fall in Gifu Prefecture. Ayu with roe has lost its fat to a reasonable extent, and the belly filled with roe has an exquisite texture. Call us to check on the limited quantity, and do not miss an opportunity to taste it. 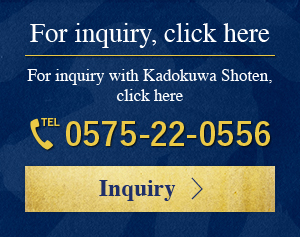